At the very beginning of this blog, at the end of 7th Edition, I wrote ‘Requiem for an Edition’, a statistical look at the Las Vegas Open. It proved to be a popular post, and I think it’s time to revisit that concept after taking a break from it for awhile.

Given the LVO has just come and gone, and the fallout from it has not yet fully settled, lets take another look.

Data: The data used for this analysis is the publicly available results from the LVO, and nothing more than that. I’ve reached out to the guys at Frontline, and they’ve said they’ll do what they can to get me more data for a more in-depth analysis, but even with just the raw results, there’s things to be learned. And while this is but a single tournament, 295 data points is actually a decently respectable sized data set.

Regrettably though, the data set is not quite as rich as the one I used for Requiem, so there is, for example, no examination of the role allies play in all this – all I have to go by is the primary detachment.

The figure below is a bar chart of all the armies, showing the total numbers that came from each army:

There is, no surprise, a huge number of Space Marine and Eldar armies – 45 and 42 armies for each. There’s a good representation of another cluster of armies, but they’re all decidedly lesser players – Tau at 22, Orks at 18, Chaos Daemons at 20 and Necrons at 21. From there it goes down, to a few lonely players rocking Inquisitorial, Skitarii and Harlequin armies. Not surprising, as none of these are really armies in the strictest sense of the word, and you likely see most of them reflected in other armies with another faction as primary.

At the end of last edition, Space Marines were 17.1% of the armies played, and Eldar or Eldar/Dark Eldar were 13%. This year? 15.3% and 14.2% respectively. While these armies are extremely competitive (as we’ll discuss in a moment), there’s not actually meaningfully more of them than there were in years past.

But what about their performance?

First, lets get this out of the way: An Eldar army won, and an Eldar army game in second. That is not inherently significant in its own right – we have to look at populations, but it’s strong indicator that they’re doing quite well. And, as an aside, I’m rather pleased with myself for calling that we’d see Pale Courts armies because of the utter lack of unit taxes in those formations before I actually looked at the winning list. Let me savor my triumph – that’s as close as I’m getting to ever winning a tournament.

Because of the changes in the way ITC does scoring, there’s a floor of 20 points on the scores, and they’re not as nicely spread over a large range as I was hoping for, but again, you work with what you have.

The overall median score for the event was 30. That would put you roughly in the vicinity of 103rd place. That may seem rather dire, but in a 295 person tournament that’s very nearly in the top third. The mean is 34 points by the way, reflecting a slight skew in the data – when you see the plots, you can see they’re not even close to normally distributed.

But what about for each army? Buckle down folks, this is a long list:

Clearly, we should all be playing Inquisition and Chaos Renegade armies. Wait…what!? Measures of central tendency, like the median, don’t actually tell you all that much on their own, especially with small numbers like the Inquisition. What we need is to see the spread of the data as well. Conveniently, the figure below does that, plotting every army’s score distribution:

This starts to give us some more information – visually, you could probably start grouping codexes into “tiers” if you were so inclined based on this plot.. There’s a couple take-aways I get from this plot and the data, but I’m sure you all will have some others.

So those are my thoughts. As a note, partially I suspect because of the compressed scoring, but also because of the dominance of a few armies, I actually think this is a unhealthier picture of the meta than existed a few years ago: 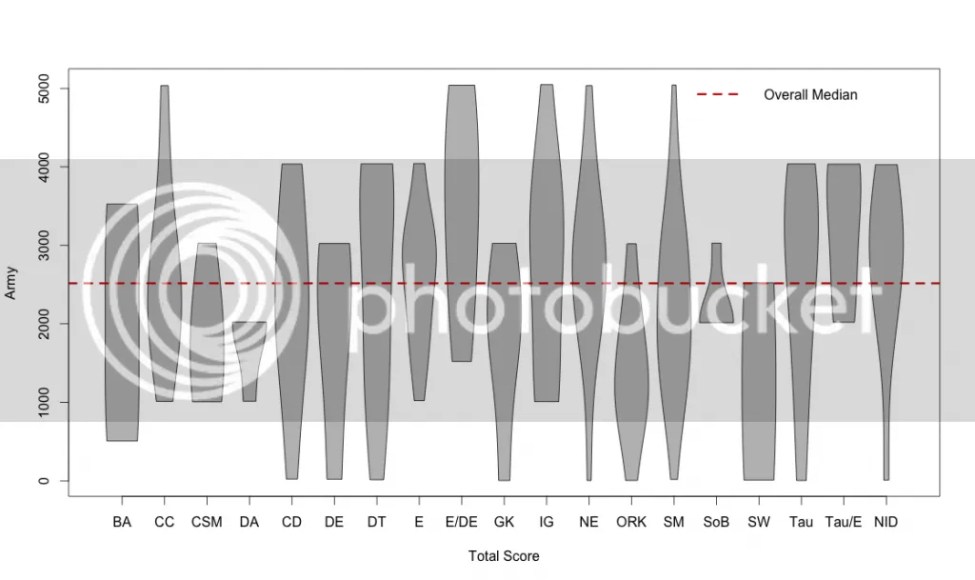 Most armies are in a good place, but there are a few that are what I’d call pathologically good – the aforementioned “big kids table”, but especially the extremely prevalent Space Marines and Eldar. Chaos Daemons, while powerful, are trickier to play than those – there’s a lot of middling-poor Daemons lists, while most Eldar and Space Marine armies are enjoying above average performance. This is born out statistically – while the smaller LVO dataset from years ago didn’t really achieve statistical significance for there being more differences in the medians than you’d expect by chance, this year’s P-value is 0.0007. That’s stupidly significant – these results aren’t just the result of random variation/player skill.

This is also pretty true if we look just at bonus scores:

The armies that did well also do well grabbing bonus points. That’s not terribly surprising, save to reveal some armies that consistently don’t get much in the way of bonuses – Tyranids, Skitarii, Harlequins, Sister of Battle most terminally, but Daemonkin, Blood Angels, and Imperial Guard aren’t far behind. Renegades, again, are good at it, but not the best at it. Dialing in more than that will require more data – stay tuned.

Club Players: The last time I did this, there were a couple “just for fun” analyses I did – the only one I can do in this data set is to figure out whether or not it matters if you’re in a club.

It does. While there’s no promise that being a member of a club will help, that kind of sad, funnel looking score plot for unaffiliated players indicates they perform more poorly in tournaments. Of course, this likely has nothing to do with being in a club, but far more likely reflects anyone intending to win a GT is probably part of a club – if you put in enough effort to try to take the LVO by storm, you’re going to be playing a lot of games with people. You might as well buy t-shirts. I don’t necessarily want to break down scores by team – that feels a bit too much like calling people out.

Closing Thoughts: 40K is in an interesting place. Most of the armies, barring those that are really more allied forces than true armies, are doing decently. Few are performing just consistently below average or barely squeaking by, and most of those armies have codexes that were written under the somewhat powered down, “Custom Force Org Chart” paradigm of codex design, ala Space Wolves, Orks and Grey Knights, among others. But outside a few edge cases, you can show up to a major competitive tournament with almost any army, and expect to do decently.

The problem is when you ask “Yeah, but can I expect to win?” Ideally, I’d love to say that yes, pick an army, play it well, and you have a shot. But that’s simply not supported by the data. The top spots are the domain of Eldar, Space Marine, Necron and Daemon players – all others need not apply, or are at the very least facing a very uphill battle. My concern now is that we seem to have shifted paradigms again – the Tau and Space Wolves have been updated with what is essentially DLC, adding a few new units and modern “detachments of formations”, but not necessarily fixing underlying problems. It remains to be seen whether a “patch” like this can bring a underperforming army like the Space Wolves up, but at present, it hasn’t moved the Tau into contention, despite some very powerful units and formations.

Enjoy what you read? Enjoyed that it was ad free? Both of those things are courtesy of our generous Patreon supporters. If you’d like more quantitatively driven thoughts on 40K and miniatures wargaming, and a hand in deciding what we cover, please consider joining them.

This site uses Akismet to reduce spam. Learn how your comment data is processed.